Memories of WW1 in Iona and Creich

Iona author E.Mairi MacArthur got in touch with our Director Jan Sutch Pickard after reading an article about names on the local war memorials in the autumn 2018 RoMHC newsletter. See the article from the newsletter on the right and click here to download the newsletter.  Here is what Mairi wrote:

"A piece in the recent RoMHC newsletter, about the Creich War Memorial and the names of those lost in the last months of 1918, brings back a vivid picture from the first months of the conflict, as recalled by my father. He was less than five years old when, on an October morning in 1914, his father called everyone outside to look north, to the sea beyond Staffa. There they could see a line of grey battle ships – the Grand Fleet, heading for the shelter of Loch na Keal.

Also in the household was a farmhand, a lad from the Ross of Mull.  He stayed behind that day at Clachanach while my grandfather rowed the youngsters over to Fidden, to visit my grandmother’s parents and siblings. On their return the lad reported with enthusiasm that he had spent the day ship-spotting, a total of fifty-seven vessels. He was keen to join up as soon as he was old enough, about two years or so later.  Home again on leave, he made sure to cross over to Clachanach to show off, with pride, his Argyll & Sutherland kilt.

On 11th November a century ago, my father was one of the Iona children who ran home in excitement after the telegram arrived at the Post Office, the school closed early and Coll MacDonald rang out the Cathedral bell.  When the island’s War Memorial was ready, in July 1921, the Clachanach MacArthurs had one name to mourn: Albert Williams, the son of my grandfather’s older sister, who by then was married and living in the south of England but who wished his name to be commemorated on Iona. Otherwise, the household had in a sense been fortunate; the menfolk had been either too old or too young to serve, although my grandfather and others were part of the local Argyllshire Volunteer Regiment.

But a year earlier the Clachanach family had also mourned as the Creich memorial was unveiled, standing proud and looking west across the moors towards the Sound of Iona. Among the names was that of their young farmhand, Duncan MacColl, who died on 21st May 1918 in the final major offensive by the German army that Spring.

At that unveiling ceremony, as moving as all those must have been, another picture comes to mind, from a conversation years ago with Janet Faulds, youngest daughter of ferryman Coll Maclean and Margaret MacCormick.  She told me that she was there, as a teenager, much affected by the speeches about the lost boys, by the music and especially by her mother’s tears.  Her uncle, Donald MacCormick, composed a pipe tune and named it “The Lads Who Will Never Return” – do local pipers still play this? I would love to know.

Through the MacCormicks, Janet was a third cousin of my father.  By a quirk of fate, here on the eastern coast of the Highlands, my partner’s daughter has married a great-grandson of Janet and their little girl, born this Spring, is therefore a fourth cousin several times removed from me – a surprising and heartwarming coincidence! I wish her many things but, above all, we have to hope that she grows up to live in just, co-operative and peaceful times. 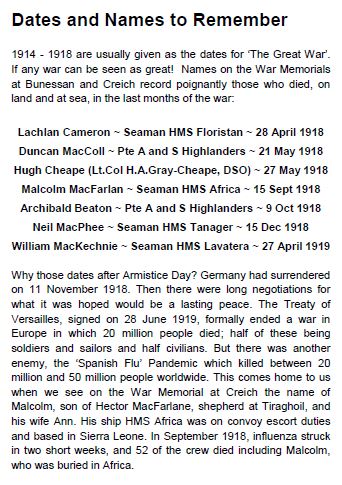