When people in Uisken, Ardchiavaig or Ardalanish died, they were usually buried in the graveyard at Kilvickeon. Men of the area would all help to carry the coffin overland, taking it in turns to lay the coffin on the ground, take a rest, and continue. The cairn on top of the hill above Uisken is known as the ‘last look back’, where the cortege stopped so that there was a last look back at their home, for the deceased.

As it is a tough and wearisome task to carry perhaps your relation or neighbour over rough and hilly ground, the party were supplied with nourishment. Now in these days, times were hard, but the carrying party were honoured, so food and drink were supplied. There was a tablecloth to drape over the coffin, and whisky to drink. Whisky was scarce then, and it came in a stoneware bottle.

On this occasion, perhaps the deceased was heavy, but there were many stops for rest and refreshment, and the party grew quite cheery in the circumstances. However, as they reached the walls of Kilvickeon, they realised that there was something not quite right, as the coffin still lay on the hill behind them.

Written down by Anne Baxter after hearing it told by Alexander Cameron of Assapol Farm in the 1970s (though she thinks that Ronnie Campbell, retelling it, added the tablecloth).

Photo above - View looking back from the cairn
Photos below - The view from Uisken beach up to the cairn (look closely!), the cairn and Kilvickeon Chapel 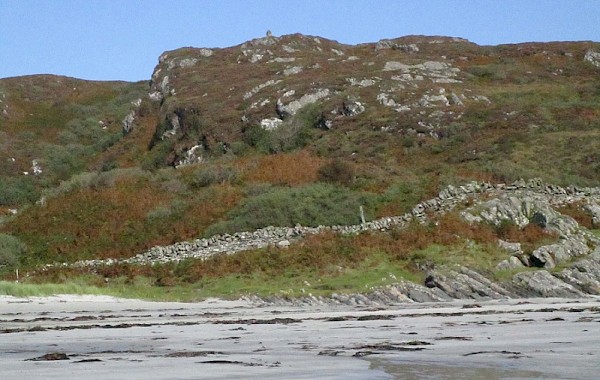 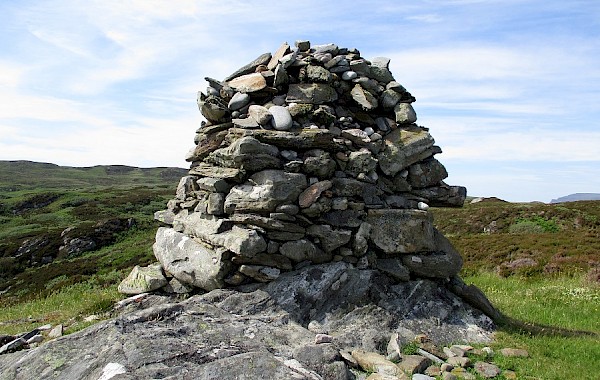