The History of the Lighthouse Keepers' Houses on Erraid

The Island of Erraid lies at the south western tip of the Ross of Mull. It is a tidal island, easily accessed across the sands from Knockvologan or Fidden at low tide. During the first part of the 19th century, it was a very quiet place. The 1841 census has one family living in the croft house at that time and the rest of the island was tenanted for livestock grazing by Fidden Farm. But in the mid 1860’s there was a dramatic change and the period from 1867 to 1871 saw Erraid transformed from its peaceful rural state to “a scene of industry such as was nowhere else to be witnessed at that moment throughout the British Isles” (taken from an 1871 newspaper account). So, what happened?

The winter of 1865/66 had some horrific gales and 24 ships were wrecked on the Torran Rocks - a six mile stretch of reefs extending out from Erraid. As a result, the merchant ship owners and insurance companies petitioned the Northern Lighthouse Board to erect a lighthouse. Thomas and David Stevenson, engineers to the Board, were commissioned to design and build it. In fact they had visited Erraid two years earlier to make a preliminary report to the Board on possible sites from which to build a lighthouse and shore station. The terrible winter of 1865 provided the evidence and impetus to get the light built. On that first trip, they were accompanied by Thomas’ son, the writer Robert Louis Stevenson. He writes of his first glimpse of Erraid in his book, ‘Memoirs and Portraits’ and incorporates aspects of his Erraid experiences in many of his other works (check out 'Kidnapped' if you haven’t already).

In 1867 a granite quarry was opened up on the side of the hill overlooking Erraid Sound and work started on the lighthouse which was to be situated on the Dubh Artach rock 15 miles out to sea.

This was no small venture. 180 men were employed in the building of the lighthouse and shore station. 96 experienced quarry men and stonemasons were brought in from Aberdeen and Peterhead and many labourers would have been recruited from the local area. Huts were erected on Erraid to house the men, but many came with families who would have had to find accommodation locally. A huge pier and workshops were built by the shore. The quarry had its own smithy and there was a second one by the pier. The island was soon shaking from the sounds of blasting, and hammering, and all the noises that accompany a huge industrial operation such as this.

There were vast movable cranes on rails to move the granite blocks around along with horses and wagons (see photo below). Each block was painstakingly shaped by hand to exact specifications. Then each course of stone was assembled on the adjustment platform to make sure that the blocks fitted perfectly (see photo below). The blocks were numbered and then packaged in wood with wool or heather to cushion against damage and moved down to the pier to be loaded into tenders. A coal-fired steamer would be moored in the bay with the two tenders loaded with stone ready to transport the finished blocks out to the reef as soon as conditions out there were favourable for a landing.

The reef was 15 miles out at sea and conditions were often far too rough for landing large granite blocks. A way had to be found to make optimum use of any fair-weather moment. They devised a simple but effective way of communicating between the reef and the shore station. A tall mast with a large black ball was erected on the reef and another one up at the signaling hut on the hill above the quarry (known now as the Observatory – see photo below). The ball could be moved up and down the mast and by displaying the ball at short and long intervals and watching with powerful telescopes, communication in a form of morse code could take place between the workers on the reef and those on Erraid. As soon as a message was received that landing conditions were suitable, the watcher at the observatory would race down the hill and alert the steamer captain. The steamer would be all ready for departure, its engines already fired up and the tenders carrying the granite blocks already in place and, within an hour of getting the message, the steamer and its load would be heading out past the Island of Soay and out of the Iona Sound. Every good weather day was used to its full advantage to get work done on the reef but there were many days when the conditions out there were impossible to land the stones. In the summer of 1867, there were only 27 days when landing was possible. Despite this, they managed to complete the building of the lighthouse by the end of 1871 and the light was first lit in 1872.

When work on the lighthouse wasn’t possible, the men were put to work building a row of 8 granite cottages, outhouses and walled gardens for the lighthouse keepers. The quality of workmanship and the attention to detail on the cottages was of a similar high standard to that of the lighthouse itself (see photos above and below of aerial views of the settlement). Every stone was beautifully shaped and fitted. The entire length of the walls surrounding the gardens was capped with curved coping stones. The roofs were tiled and fitted with lead guttering that fed into water tanks to supply each house. There were kitchen sinks plumbed into a sewage system. Each house had its own outhouse at the bottom of the garden. Two granite washhouses were built at the back of the row of cottages for the families to use. There was even a sundial on a pedestal installed in the end garden. This was housing of a quality normally only accessible on Mull by those with significant wealth. It must have caused quite a stir in the local community. A job as a lighthouse keeper would have been well sought after.

There were 8 keepers and their families on Erraid. Four keepers worked for Skerryvore lighthouse and four for Dubh Artach. Three men at a time would be on each light staying out for a minimum of three weeks at a time. The men left on shore would be working on maintenance. The shore station was run somewhat like a military institution. Inspections were carried out unannounced and the women were expected to maintain high standards of housekeeping. There was a great deal of polishing of doorknobs, scrubbing doorsteps, and dusting every ledge, nook and cranny. Often there was a fair degree of rivalry between the women. The families grew their own vegetables, fished and caught rabbits. Fuel and boxes of key provisions would come from Oban but the women and children would walk over to the Knockvologan and Fidden farms for milk, butter and eggs and into Fionnphort (to the two shops which existed then) for other smaller items. The island had its own post box and Hughie McGilvray from the croft house would row the mail daily over to Fidden, meet up with the Fionnphort postman and exchange gossip and mail.

In 1886 a school was opened on Erraid, using the large room at the end of the row. It started with 11 children from the shore station and 4 from the McGilvray family. The teacher was housed in a cottage down near the pier. By the early 1920’s the Erraid school was also taking in children from the Ross. Bella Cameron and her sister from Knockvologan would walk to Erraid across the sand at low tide or in their father’s boat when the tide was in.

In 1952 the shore station was moved to Oban, the island was put up for sale by the Argyll estates and the cottages became empty. They were mostly used for holiday homes by the successive owners of the island until, in 1978, the current owners, the Van der Sluis family, offered the Findhorn Foundation a custodial role of the island, and the cottages once again became homes.

A version of this article first appeared in the August 2020 edition of 'Round & About'.

Above: Aerial view of the whole settlement from the sea 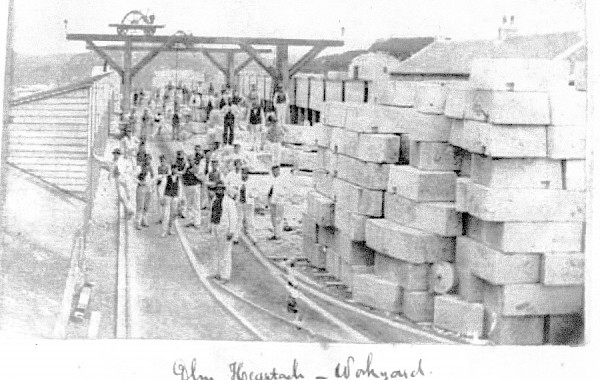 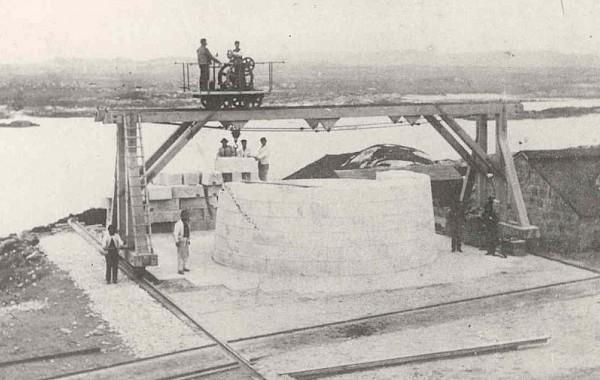 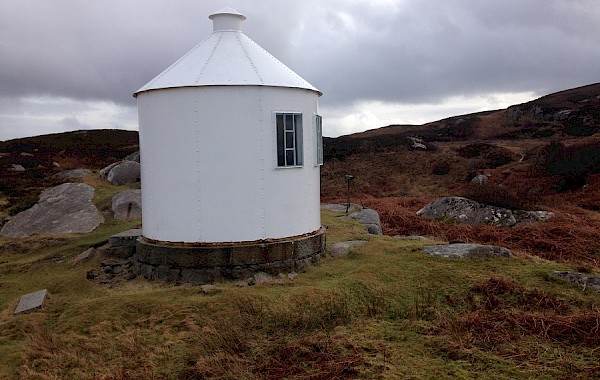 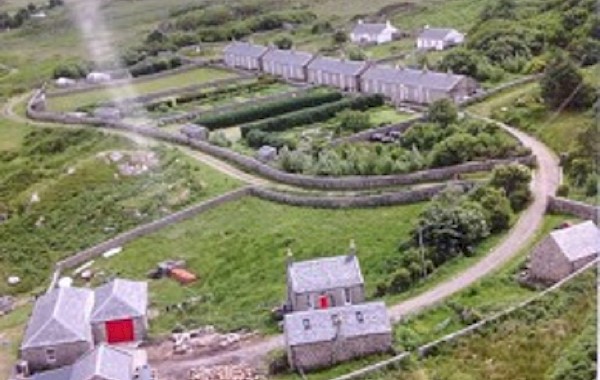