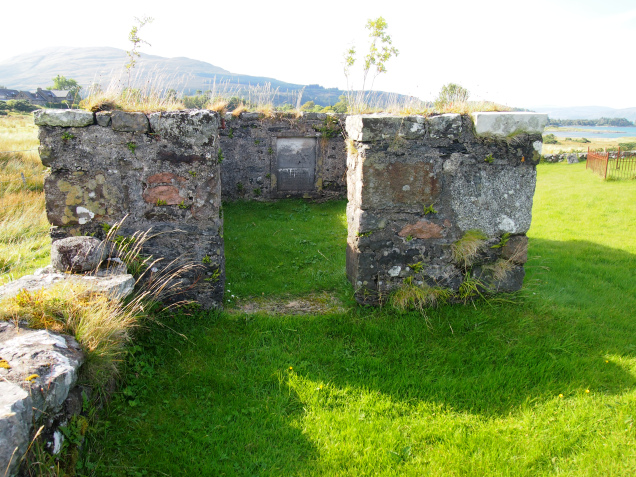 The enigma of Kilpatrick - Cille-Phadraig,

Kilpatrick was an area where I carried out a landscape archaeology survey. I selected the site because I knew there were far more historical features present than the few documented in Argyll 3 and other publications. In the end I manage to record well over 150 previously unrecorded building ruins and other features. I also created a database of all the people that had been recorded in documents associated with the area such as Statistical Accounts, burial records and censuses. The name Kilpatrick, or Cille-Phadraig, literally means Chapel of St. Patrick, and the first of a number of enigmas about the area is that there are no known written records of the existence of a chapel, nor have any remains of such a building been identified to date. The burial ground does remain, however, and is known to have been in existence well before 1700.

Kilpatrick lies around 2 miles (3 km) to the east of Bunessan, in the district of Brolas. The western limit of the area is formed by the March Boundary with the district of the Ross of Mull to the west. The main A 849 road runs through the northern section of the site, with Kilpatrick Burial Ground at its eastern end, on the northern side of the road where the old road diverges.

Kilpatrick covers a total area of around 425 acres (170 ha), in a roughly rectangular shape of around 800 metres wide by 2,000 metres long. The site is naturally split between the lower coastal land, which rises in a series of basaltic lava ‘steps’, and the moorland plateau above the head dyke. The lower land covers an area of around 175 acres (70 hectares) and was, for a period, divided into four crofts by long stone dykes that run north-south from the head dyke down to the sea. A series of fragments of older banks, ditches and walls also occur, which show earlier divisions of the land. These very early boundaries appear to indicate an extensive prehistoric use of the landscape, with divisions very different in nature and orientation to the dykes between crofts. Numerous areas of former cultivation by rig and furrow can still be seen both on the ground, and from aerial photographs. The earliest known remains appear to date from the Bronze Age (up to 4,000 years ago). The best preserved of these is a cairn that stands on a significant promontory above Dun na Muirheidh (Fort of the Fish Spear), which is thought to originate from the Iron Age (c. 600BC), but which was then occupied, at least intermittently, through to the late Middle Ages. The large fish trap at the end of the bay may also date from this time. Remains of farm buildings from a wide range of periods are also dotted across the area, including early shieling huts on the high moorland. J. Clare